Internationally acclaimed, GRAMMY Award-nominated and BRIT Female Artist of the Year-nominated musician Tina Guo has established an international career as a virtuoso acoustic/electric cellist, multi-instrumentalist, composer, and entrepreneur. Known for her unique genre-crossing style, she is one of the most recorded Solo Cellists of all time and can be heard on hundreds of Blockbuster Film, Television, and Game Soundtracks. In 2018, Tina signed as an official brand partner with Bentley Motors, composing, performing, and producing the launch music for the luxury hybrid vehicle, Bentayga Hybrid. In 2019, Tina partnered with the Ritz-Carlton to create a soundtrack to the endless possibilities and unforgettable moments experienced at The Ritz-Carlton. 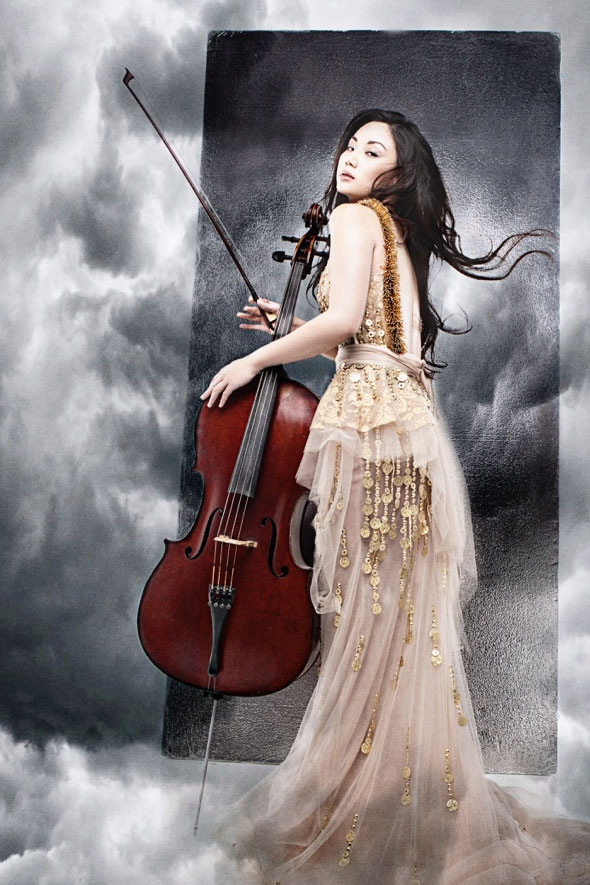 As a classical soloist, Tina’s engagements with orchestras around the world include the San Diego Symphony, the State of Mexico National Symphony, the Thessaloniki State Symphony in Greece, the Petrobras Symphony in Brazil, and the Vancouver Island Symphony in British Columbia. She collaborated with violinist Midori Goto in Dvorak’s American String Quartet at Walt Disney Concert Hall in Los Angeles, and completed four national tours of Mexico and Italy performing the Shostakovich, Dvorak, Haydn, and Saint-Saëns Cello Concertos.

Tina appeared with the Tenerife Symphony and Choir performing “Batman: The Dark Knight” Suite at the Tenerife International Film Festival. She was featured at the Krakow Film Music Festival, performing as soloist on music from Vikings, Dexter, Game of Thrones, and Chicago Fire with the Krakow Symphony and Polish Radio Choir. Tina completed an acoustic tour and two sold-out performances at Carnegie Hall with Blues Legend Joe Bonamassa and the live album from the Carnegie Hall concert reached #1 on the Blues Billboard Charts. In 2016 and 2017, Tina toured as a featured soloist with Hans Zimmer Live. They will be touring again through Asia and Australia in Fall 2019.

Tina was featured in commercials for Mazda and United Airlines, and a soloist in Cirque Du Soleil’s Michael Jackson “The Immortal” World Tour from 2011-2013 performing in sold out arenas around the world. The tour performed to over 3.7 million people and is one of the highest grossing tours of all time. Tina is featured on the Epic Records release “Immortal,” replacing the original guitar solo in “Beat It” with an Electric Cello/Guitar Battle-style duet with guitarist Greg Howe. She performed with Skrillex, Dplo, and Justin Bieber at the 2016 Grammy Awards. 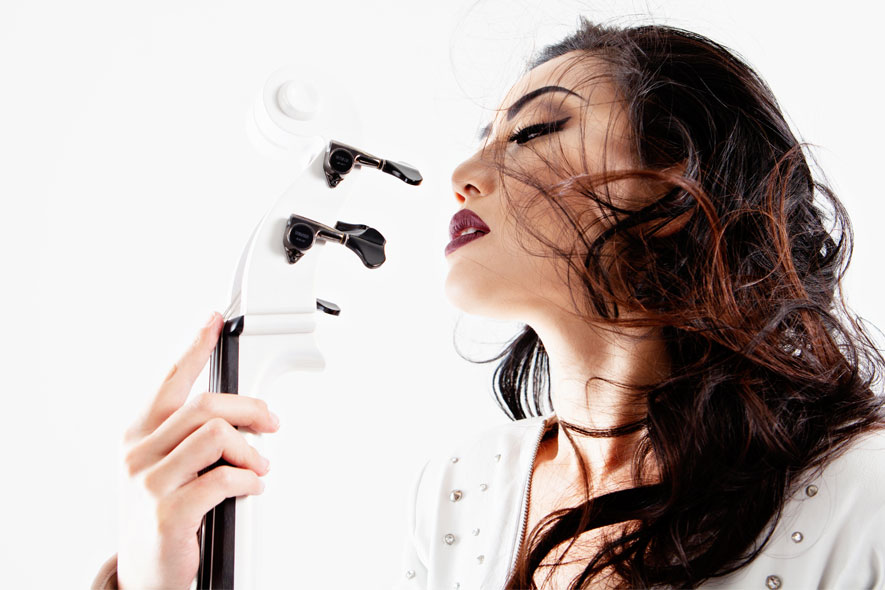 “Tina Guo represents the new wave of classical artists finding younger audiences via soundtracks and video games and is nominated for Female Artist Of The Year. Last year, she released an album of video game music – ‘Game On!’ – establishing her as the pre-eminent force in a growing genre.”

Tina performed alongside Hans Zimmer at the Premiere of Inception, and at a concert celebrating Kung Fu Panda 2 for Dreamworks with Hans and John Powell. She was a featured performer at the League of Legends World Championship at a sold-out Staples Center in Los Angeles and an audience of 33 million streaming online. Tina was featured on the Electric Cello with The Crystal Method, Wes Borland (Limp Bizkit), Danny Lohner (NIN), Joe Letz (Combichrist), and the Hollywood Scoring Orchestra. She has also been a featured performer at Comic Con, Blizzcon, and with Video Games Live. Tina toured Europe with Guitar Virtuoso Al Di Meola, who is also one of the featured guests on her album “Cello Metal.”

Tina contributed Electric Cello to the creation of elements that were used to create the sound of the Kaijus in Pacific Rim. Her arrangement and performance of “The Flight of the Bumble-Bee” was featured in the end credits for The Heartbreak Kid. Tina composed music for the feature film Persecuted and has many compositions licensed into TV and Film projects. 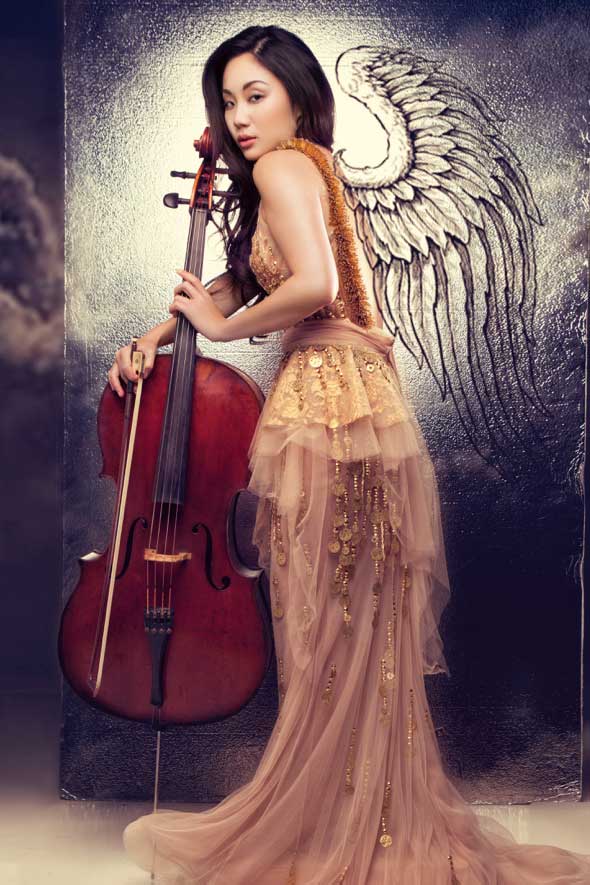 Tina was featured on The Ellen DeGeneres Show playing “Beat It” and also performed at the American Country Music Awards and American Music Awards with Carrie Underwood, on Dancing with the Stars with Carlos Santana and India Arie, Jimmy Kimmel Live with Ellie Goulding, the Lopez Show with Far East Movement, the Grammy Awards with the Foo Fighters, at the MTV Movie Awards, on American Idol, with the Battlestar Galactica Orchestra, and with Brazilian guitarist Victor Biglione in a Jimi Hendrix Tribute Concert at the Copacabana Palace in Rio de Janeiro. She has performed at the Sundance Film Festival, the Playboy Mansion, and has shared the stage with Adele, Pharrell, Alicia Keys, Steven Tyler, Katie Perry, The Tenors, Stevie Wonder, Peter Gabriel, Josh Groban, John Legend, LeAnn Rhimes, Chris Isaak, Il Divo, Ariana Grande, Lupe Fiasco, Common, Jennifer Hudson, and Michael McDonald. Corporate clients have included Bentley, Cartier, The Ritz-Carlton, Microsoft, Apple, Cephalon Biopharmaceutics, Adecco, KPMG, Nuskin, and the PGA. Tina was a featured performer at the Cartier High Jewelry Gala in New York City, and has recorded on hundreds of albums, with artists such as John Legend, Ciara, 3 Doors Down, Jordan Smith, David Archuleta, and Big K.R.I.T.

“When she grabs the Cello, it’s like a sword. She becomes the Wonder Woman” 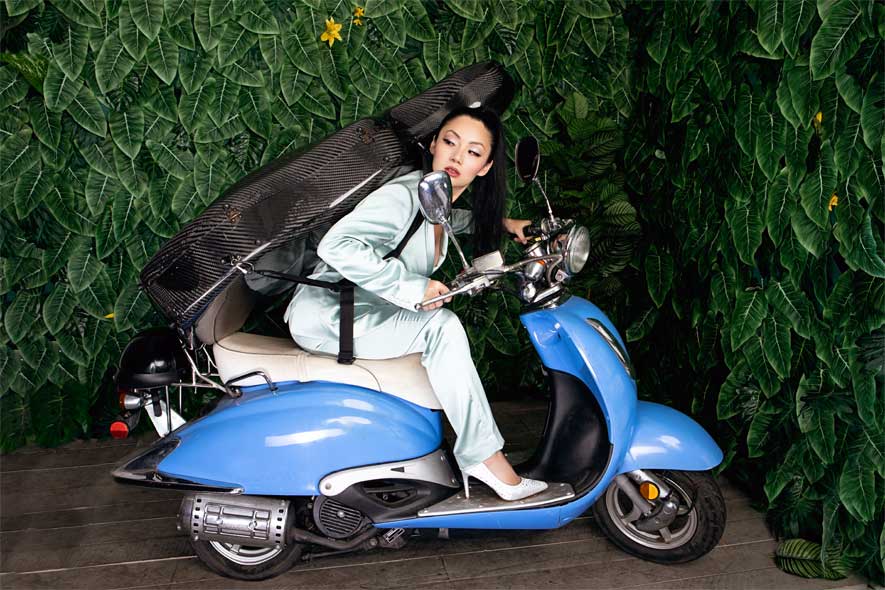 Tina’s musical education began at the age of 3, when she began her piano studies in Shanghai, China. After coming to America at the age of 5, she began violin lessons with her mother and later began studying the cello under the instruction of her father, Lu-Yan Guo at the age of 7. Tina continued her professional cello studies with Eleonore Schoenfeld at the the University of Southern California’s Thornton School of Music on full scholarship, and was also a Governor’s Scholar for academic excellence.

Tina’s Music Video for “Queen Bee” won Best Short Film/Music Video at the Downtown Los Angeles Film Festival. Her songs “Queen Bee” and “Forbidden City” are also available for download to play for Rockband on Xbox 360 and PlayStation. Metal Hammer Magazine UK described Tina as “an international sensation” and she was also featured in Glamour Magazine Russia and Official Playstation Magazine. Tina was the 2014 Innovation Award Recipient from the Asian Heritage Awards, named “Instrumentalist of the Year” at the 2015 Los Angeles Music Awards, and won in the New Age Category at the 2016 Hollywood Music in Media Awards. She was nominated for Best New Age Album at the 2017 Grammy Awards, and Female Artist of the Year at the 2018 Classic BRIT Awards.

An avid writer, her first published work is “Event Horizons of Yin and Yang,” a collection of philosophical prose and poetry. Tina holds a Bachelors in Metaphysical Theology with a focus on Eastern Philosophy. She is passionate about financial planning and also offers career consultation sessions through her company, Guo Industries. Inc.

Tina has provided music as a Composer and Producer for Bentley, the Ritz-Carlton, Mercedes, Call of Duty: Ghosts MTX 4, the Official Launch Trailer for video game ArchAge “A Way Home,” and the Official Trailer for feature film “The Best Offer.” Her music can be heard on WWE Smackdown, WWE Monday Night Raw, NHL Rivals, Chopped, Mission October on Fox Sports, Inside the PGA Tour, Road to Ferrari, and Against the Odds on the American Heroes Channel. In 2015, she released a Charity album with 13 film/tv/media composers: “Tina Guo & Composers for Charity.” 100% of the proceeds from the album go directly to Mr. Holland’s Opus Foundation in support of music education.

In October 2016, Tina signed an exclusive recording contract with Sony Music after self releasing 9 albums through her own label, and her debut Sony album “GAME ON!” was released in 2017. Tina is currently working on her second Sony-released album of reimagined Classical Works.

Tina performs on her Gand & Bernadel Cello made in Paris, France in 1880. On electric cello, she plays a customized Yamaha SVC-210 as a Yamaha Performing Artist. Tina also plays an Erhu made in Shanghai, China. 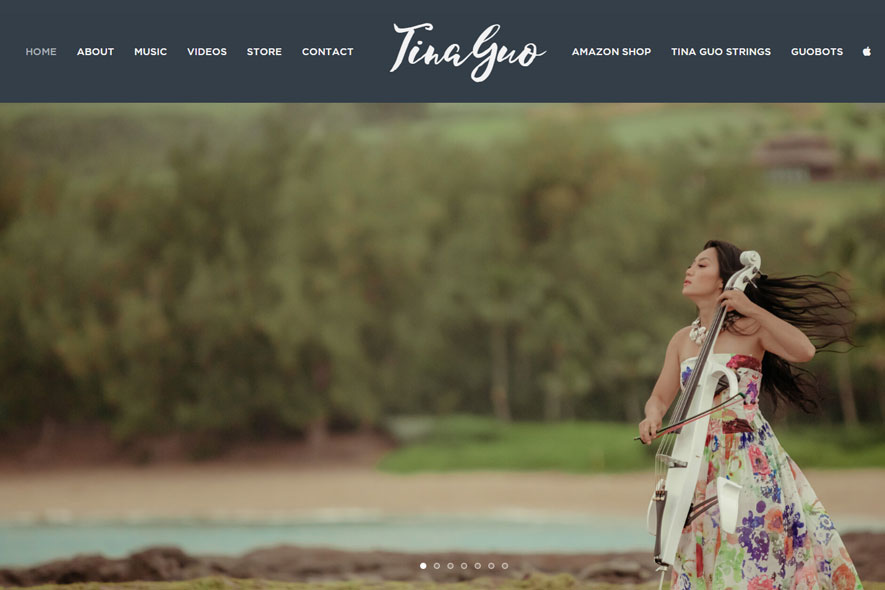 Please visit tinaguo.com to find out more about the artist including forthcoming tours, events and a portfolio of images, videos and recorded audio. Follow Tina Guo on Instagram and Facebook