“Technically superb and eloquent in his expressivity, he held the capacity audience spellbound with an interpretation of exceptional authority.”

Sheku Kanneh-Mason, one of the brightest young stars on the classical music scene, became a household name worldwide in May 2018 after performing at the Wedding of the Duke and Duchess of Sussex at Windsor Castle. His performance was greeted with universal excitement after being watched by nearly two billion people globally. 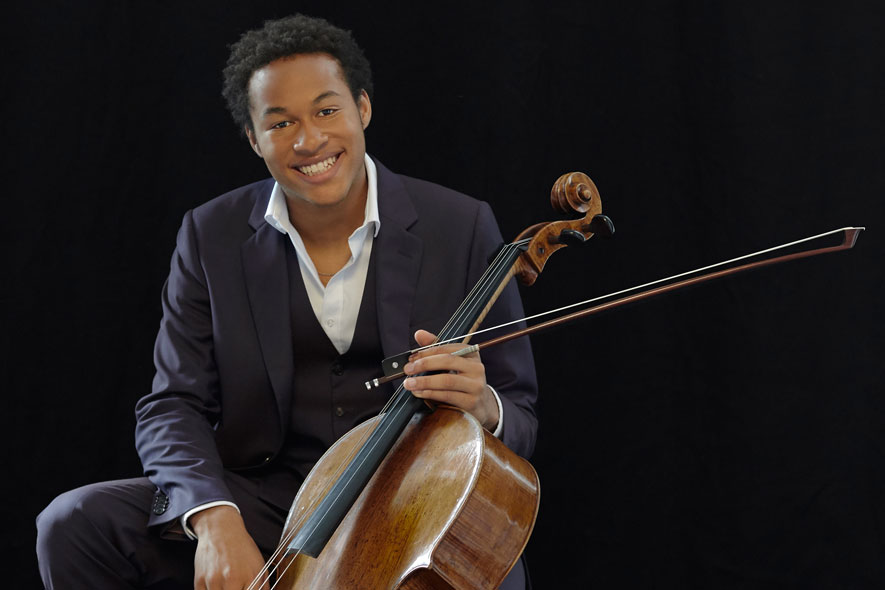 The winner of the 2016 BBC Young Musician competition, Sheku is already in great demand from major orchestras and concert halls worldwide. In January 2018, his debut recording for Decca Classics, Inspiration, was released, featuring the Shostakovich Cello Concerto No. 1 with the City of Birmingham Symphony Orchestra and Mirga Gražinytė-Tyla. The phenomenal success of the album propelled Sheku to a debut spot at number 18 in the Official UK Album charts, and number 1 in the Classical chart. Alongside short works by Shostakovich, Offenbach, Casals, and Saint-Saëns, Sheku’s own arrangement of Bob Marley’s No Woman No Cry was also featured on the album, and went viral on social media, clocking 1 million streams in its first month on Spotify alone. In June 2018, Sheku received the Male Artist of the Year and the Critics’ Choice awards at the re-launched Classic BRIT Awards, and in July 2018 became the first artist to receive the new BRIT Certified Breakthrough Award, having sold over 30,000 copies of his debut album in the UK and surpassing 100,000 album sales worldwide.

“Kanneh-Mason gave an astonishingly assured performance. The strength of Kanneh-Mason’s approach was that it was so nuanced; this, plus his technical command, led to a memorable account.” 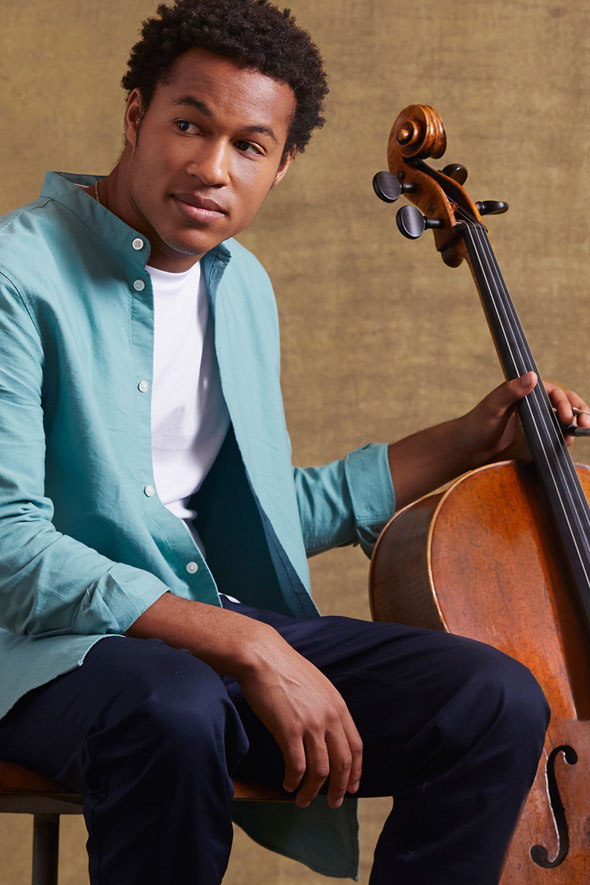 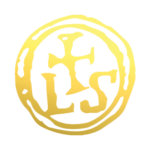 Sheku has already performed with a number of the major UK orchestras and made debuts in the 18/19 season with the Seattle Symphony, the Orchestre Philharmonique de Radio France, Netherlands Chamber Orchestra at the Concertgebouw, the Atlanta Symphony, the Japan Philharmonic as well as returning to the BBC Symphony Orchestra to perform the Elgar Concerto in his hometown of Nottingham.

In 19/20, he opens the London Philharmonic season and makes debuts with the Frankfurt Radio Symphony, Baltimore Symphony, and the Los Angeles Chamber Orchestra among others. He also makes his debut in a number of major German cities performing Elgar with the CBSO.

Recital performances in 18/19 and 19/20 have included and will include debuts at the Barbican Centre’s Milton Court, Wigmore Hall, Zurich Tonhalle, Lucerne Festival, as well as a major tour of North America to include concerts in Boston, Los Angeles, Berkeley, Ann Arbor, Minnesota and Sheku’s recital debut at Carnegie Hall New York.

In 2017, Sheku made his BBC Proms debut at the Royal Albert Hall as soloist with the Chineke! Orchestra, an ensemble with which he enjoys a special relationship, having taken part in their debut concert at the Royal Festival Hall in 2015 and returning as soloist to perform the Haydn Concerto in September 2016. He returned to the Albert Hall to perform the Elgar Concerto at the Proms in Summer 2019. Sheku is passionate about the importance of making classical music accessible to all and is currently the first London Music Masters Junior Ambassador. In 2018/19, he began a two year role as ‘Young Artist in Residence’ at the Royal Liverpool Philharmonic taking part in the orchestra’s education programme as well as performing in Liverpool a number of times across the two seasons.

In February 2018, Sheku performed ‘Evening of Roses’ at the BAFTAS Awards show at the Royal Albert Hall. He was joined on stage by four of his six siblings, all of whom perform classical music to an exceptional standard. This was the first time any artist has been invited to perform during the ceremony two years running and followed his memorable performance of Leonard Cohen’s ‘Hallelujah’ at the 2017 BAFTAs, the subsequent recording going viral on YouTube.

In July 2019, Sheku was awarded the prestigious 2019 PPL Classical Award at the O2 Silver Clef ceremony in support of independent music therapy charity, Nordoff Robbins. In 2017, he was awarded the South Bank Sky Arts Breakthrough Award, given by the judges to the most promising young Artist across all genres, following recent winners Billie Piper and Stormzy. He has performed alongside Hollywood A-listers in ‘The Children’s Monologues’ directed by Danny Boyle at Carnegie Hall New York and has played at No. 10 Downing Street in front of an illustrious guest list for Black History Month.

Elgar is a brand new album of works which features Elgar’s Cello Concerto, arguably the best-known work in the classical canon written for solo cello, which celebrated the 100th anniversary of its first performance in October 2019.

“I have dreamt of recording Elgar’s Cello Concerto ever since I heard Jacqueline du Pré’s version. I can’t put into words how amazing it was to record this iconic work at Abbey Road Studios with Sir Simon Rattle and the London Symphony Orchestra!” 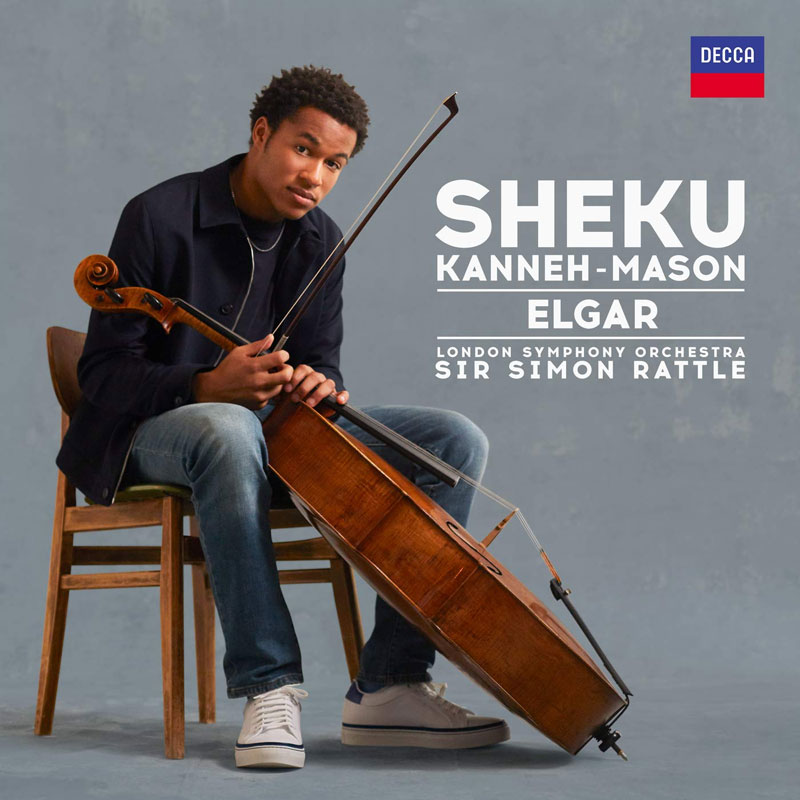 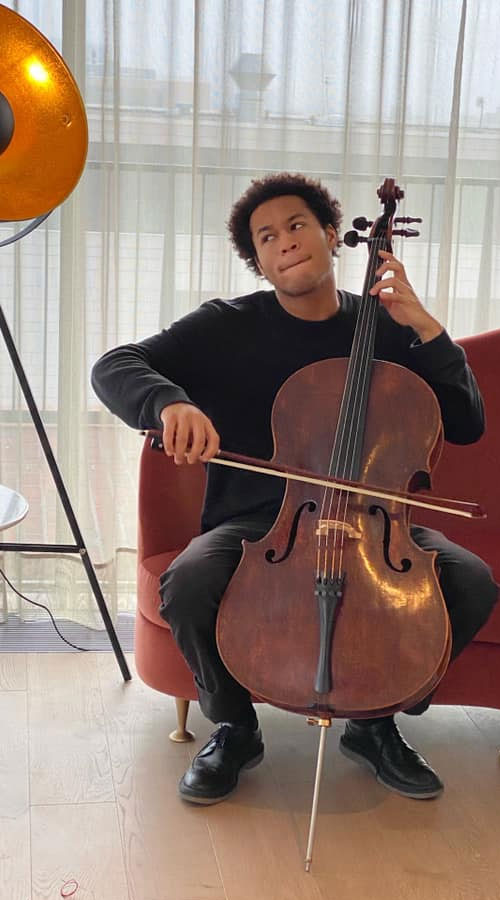 NEWS: Congratulations to Sheku Kanneh-Mason on the long-term loan of the “Ex-Goritzki” c. 1700 Matteo Goffriller facilitated by the Florian Leonhard Fellowship. We have had the chance to meet with Sheku to optimize the string setup on the Goffriller, and can confirm that it sounds amazing with our Il Cannone Cello Strings.

Please visit shekukannehmason.com to find out more about the artist including forthcoming events and a portfolio of images, videos and recorded audio. 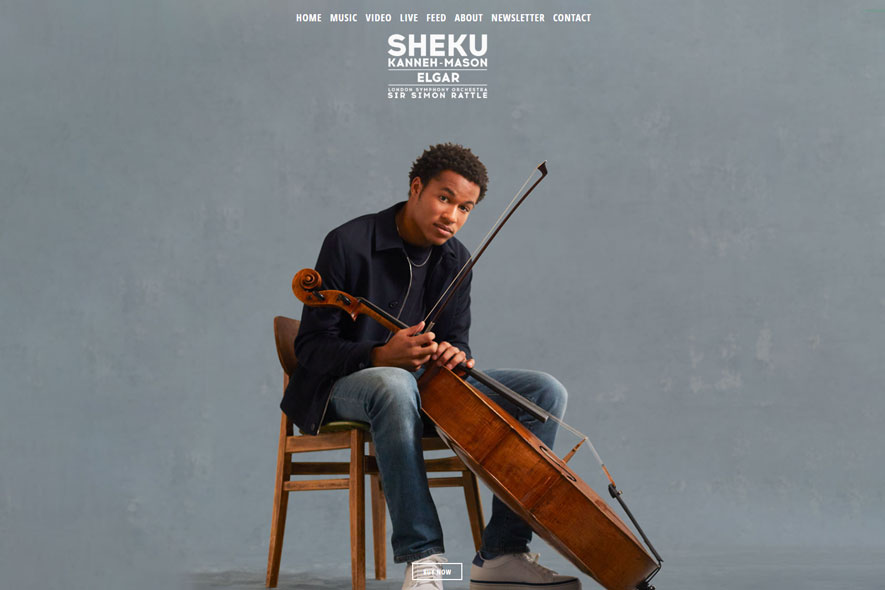